UPDATED – One of Niagara’s Most Controversial Public Figures, David Barrick, and the NPCA Have Finally Parted Ways

The controversial “acting CAO” has left the Conservation Authority by “mutual agreement” – effective this February 21, 2019

(In our haste to get a breaking report about David Barrick’s departure from the NPCA up this February 21st, Niagara At Large made the mistake of using Grimsby Mayor Jeff Jordan’s headshot in the body of the report instead of NPCA chair and West Lincoln Mayor Dave Bylsma’s. We sincerely apologize to all concerned.) 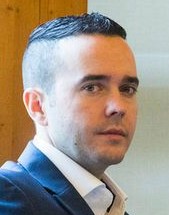 David Barrick, one of the most controversial figures who has worked his way up to top of the Niagara Peninsula Conservation Authority’s administrative food chain over the past six years, has now partied ways with the agency.

Members of the NPCA’s board of directors and staff received official word this February 21st afternoon of a “mutual separation agreement,” effective immediately and signed between Barrick, who last served as the Conservation Authority’s “acting CAO,” and the board.

The agreement apparently bars any public disclosure of how much any buy out package for Barrick cost the taxpayers of Niagara, Hamilton and Haldimand County who contribute (with most of the money coming from Niagara) to the NPCA’s $9 million-plus a year budget.

A memo circulated this February 21st from the NPCA board’s current Chair, Dave Bylsma, to other board members and the agency’s staff reads, in part –

“Hello NPCA Board of Directors … 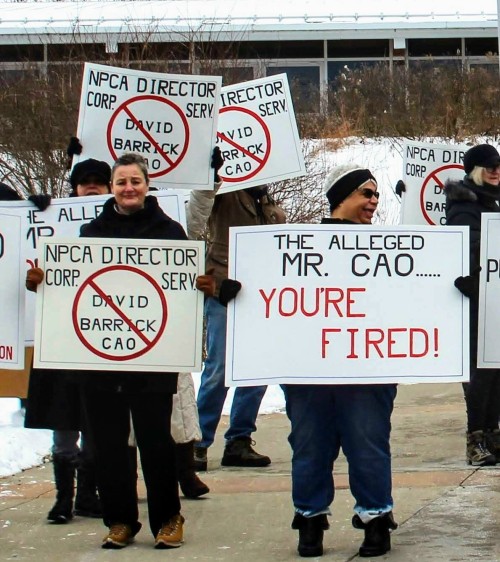 Niagara citizens outside an NPCA board meeting as recently as this February 20th, holding up signs demanding the ouster of David Barrick. Photo courtesy of Emily Beth Spanton.

“I am proud of what I was able to accomplish during my tenure with the NPCA. During my time, and with the support of my team, we went from running at an annual net deficit of over $550,000 in 2013, to a combined net surplus for NPCA parks of over $280,000 by year-end 2018. The net surpluses add to the overall financial health of the organization, increased investment in capital have been made and operational reserves have been replenished,” said former Interim CAO David Barrick.

“I am incredibly grateful to our Board of Directors who remain engaged and committed to the best interest of the organization, and the assurance that we are following the Conservation Authorities Act. As I move forward to other opportunities, I am excited to bring the same level of creative problem solving, engagement and commitment to excellence that I was able to provide to NPCA.”

The NPCA CAO Selection Committee met for a second time February 19, 2019 to engage a third-party recruitment firm to expedite their search for a permanent CAO. 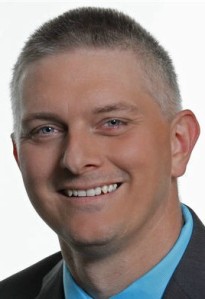 NPCA chair Dave Bylsma recognizes  ‘supportive role’ David Barrick has played and “guidance” he has provided during period of in transition at Conservation Authority.

“Interim CAO David Barrick supported this Board through a period of transition and change,” says NPCA Chair Dave Bylsma. “He has provided guidance and context to enable us to expedite our search for a permanent CAO. I am certain that our fulsome Permanent CAO recruitment process will result in us hiring an individual who will continue to move this organization forward in a positive direction.”

Barrick who was promoted to at least two previous administrative posts before his short tenure this December, January and February as acting CAO under circumstances that raised serious questions in the eyes of the pubic as to whether a serious enough search had been made for the qualified candidate for the positions.

Then late this past fall, he was reportedly fired by then NPCA CAO Mark Brickell who was then, according to reports, fired by the outgoing NPCA board. Barrick was then reportedly hired back and by early December, the public learned that he was the NPCA’s acting or interim CAO. 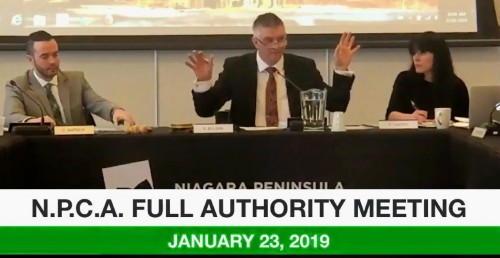 David Barrick, left, still sitting as acting or interim CAO for the NPCA, next to the NPCA’s board Chair, Dave Bylsma, as recently as a few weeks ago.

Brickell has since reportedly sued the NPCA for more than $2 million, claiming that he was fired illegally.

This January 31st, Barrick, who also served as a regional councillor for Port Colborne up to the end of the last term (ending last November) of the Region’s council, drew the frustration and anger of many on the Region’s new council when he tabled a 2019 budget for the NPCA that failed to answer many questions as to how the more than $8 million the agency was demanding from the Region would be spent.

At one point, Barrick went so far as to tell the councillors that provincial rules does not require him to share more details about the budget and the Region’s council simply has no choice but to approve the amount the agency is asking for.

In more recent weeks, other incidents occurred under Barrick’s tenure as acting CAO that drew anger from members of the public, including the sudden firing for reasons that remain unknown of Stuart McPherson, a respected watershed restoration employee with the NPCA, and a phone call from someone at the NPCA to Niagara Regional Police, complaining that the citizens group, A Better Niagara, had posted something on social media that was threatening to Barrick or others in administration.

Police quickly concluded that the citizens group had posted nothing that warranted further action on their part.

Meanwhile, the NPCA remains a public agency that in the view of many citizens and political representatives across Niagara that is in a state of chaos and crisis, and many blame Barrick and others who have served in administration and on the old board for this sad state of affairs.

In a brief statement this February 22nd, Liz Benneian, executive director of A Better Niagara, a group that has been closely monitoring NPCA activities, had this to say –

“With Barrick gone, there is now a possibility to rebuild the Conservation Authority. The new board took many positive actions at their board meeting on Wednesday and they have renewed the hope of citizens that Niagara may eventually have a professional, effective and highly functioning Conservation Authority again.”

Niagara At Large will have more on all of this later, including information on a question that is already being raised by citizens across the region – Will Niagara taxpayers ever find out how much of their money was spent to see David Barrick out the door?

4 responses to “UPDATED – One of Niagara’s Most Controversial Public Figures, David Barrick, and the NPCA Have Finally Parted Ways”