Nestlé, Tim Hortons and PepsiCo Found To Be Worst Plastic Polluters In Canada

“It’s high time we shine a light on the role that throwaway plastic producers are playing in the plastic pollution crisis,” – Sarah King, Greenpeace Canada’s Head of Oceans and Plastics

The Coca-Cola Company, PepsiCo, and Nestlé also found to  respectively  be the worst plastic polluters worldwide 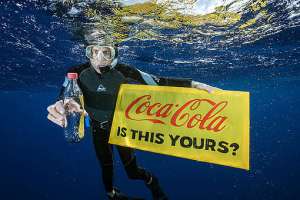 A Greenpeace diver holds a banner reading “Coca-Cola is this yours?” and a
Coca-Cola bottle found adrift in the garbage patch.
The crew of the Greenpeace ship MY Arctic Sunrise voyage into the Great Pacific Garbage Patch document plastics and other marine debris. The Great Pacific Garbage Patch is a soupy mix of plastics and microplastics, now twice the size of Texas, in the middle of the North Pacific Ocean.

Montreal  – The Coca-Cola Company, PepsiCo, and Nestlé were the corporations most frequently identified in the international report through the 239 cleanup – audits held on World Clean Up Day in  42 countries by the Break Free From Plastic movement.

The Coca-Cola Company, the 4th worst polluter in the Canadian audit, was the top global polluter in the international audit, with Coke-branded plastic pollution found in 40 of the 42 participating countries.

The global brand audit effort is the most comprehensive snapshot of the worst plastic polluting corporations around the world.

The auditors sort trash collected on shorelines by type, brand and then manufacturing corporation to determine the total contribution of a company at a location. These results are then compiled per country, region and globally.

In Canada, top polluting corporations – Nestlé, Tim Hortons, PepsiCo., The Coca-Cola Company and McDonald’s – account for 46% of the 2231 pieces of identifiable branded plastic trash that was collected during the brand audits. 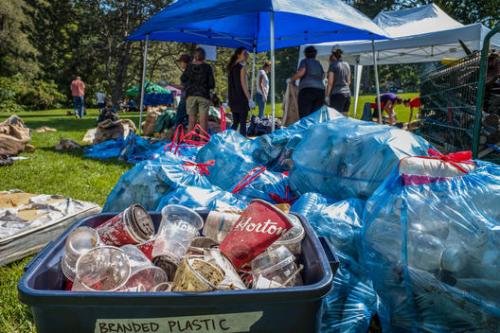 “It’s high time we shine a light on the role that throwaway plastic producers are playing in the plastic pollution crisis,” said Sarah King, Greenpeace Canada’s Head of Oceans and Plastics. 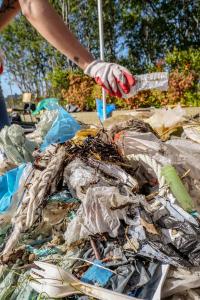 “Brand audits create undeniable evidence of how companies like Nestlé, Tim Hortons, PepsiCo., Coca-Cola and McDonald’s are trashing our shorelines and green spaces across Canada.”

Food wrappers were the most common type of plastic item found, followed by bottles, cups, bottle caps and then branded shopping bags. Food packaging was identified as the top product type, followed by household products.

In Canada, results suggest that the recyclability of a product does not necessarily reduce its likelihood of being found in a shoreline or community cleanup and brand audit.

“It’s clear that cleanups and recycling cannot contend with the never-ending flow of single-use plastic waste being produced by corporations.The only way to curb plastic pollution is by stopping corporations from producing throwaway plastics in the first place,” added King.

Globally, over 187,000 pieces of plastic trash were audited, identifying thousands of brands whose packaging relies on the single-use plastics that pollute our oceans and waterways globally. Polystyrene (eg. styrofoam) was the most common type of plastic found, followed closely by PET, a material used in bottles, containers, and other packaging.

The audits, led by Break Free From Plastic member organizations, found that The Coca-Cola Company, PepsiCo, Nestlé, Danone, Mondelez International, Procter & Gamble, Unilever, Perfetti van Melle, Mars Incorporated and Colgate-Palmolive were the most frequent multinational brands collected in cleanups, in that order. This ranking of multinational corporations included brands that were found in at least 10 of the 42 participating countries.

While the brand audits do not provide a complete picture of corporations’ plastic pollution footprints, they are the best indication to date of the worst plastic polluters globally. The Break Free From Plastic movement is urging corporations to end their reliance on single-use plastics, prioritizing innovation and alternative delivery systems for products.

Greenpeace has been calling on plastic producing corporations and distributors to commit to phase out single-use plastics, to invest in new delivery models based on reuse and refill systems, and to take responsibility for the plastic pollution crisis they continue to exacerbate.

Greenpeace is also urging the Canadian government to hold corporations accountable for the environmental and social impacts of their products and legislate binding plastic reduction targets, including a ban on single-use plastics. 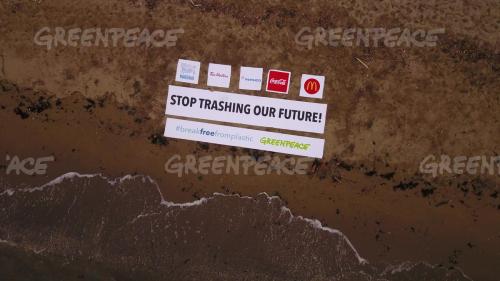 Sign the petition now and join us in pushing for a plastic-free future.

Greenpeace – Who we are

Greenpeace exists because this fragile earth deserves a voice. It needs solutions. It needs change. It needs action.

Around the globe, we are standing up with communities, and we are holding governments and corporations accountable. Whether on the streets or at the ballot box, we hold the real power when we work together.

We believe optimism is a form of courage. We believe that a billion acts of courage can spark a brighter tomorrow.

To that end we model courage, we champion courage, we share stories of courageous acts by our supporters and allies, we invite people out of their comfort zones to take courageous action with us, individually in their daily lives, and in community with others who share our commitment to a better world.

A green and peaceful future is our quest. The heroes of our story are all of us who believe that a better world is not only within reach, but being built today.

One response to “Nestlé, Tim Hortons and PepsiCo Found To Be Worst Plastic Polluters In Canada”