(A Brief Foreword  from NAL reporter and publisher Doug Draper – Just by coincidence, the Trump administration south of Canada’s border has just announced plans to move forward with steps to weaken controls on emissions from gas and diesel  powered trucks and cars, which are also significant sources of climate changing carbon and of other pollutants that contribute to health-threatening concentrations of smog.

One key thing that should be considered in all of this is that when you control for carbon emissions you are also often or almost always controlling  other pollutants, including nitrogen oxides,  that cause the smog that, as numerous studies have shown over the past three or more decades, contribute to premature deaths in populations of people (especially older people) who  already suffer from respiratory and cardiovascular disease. 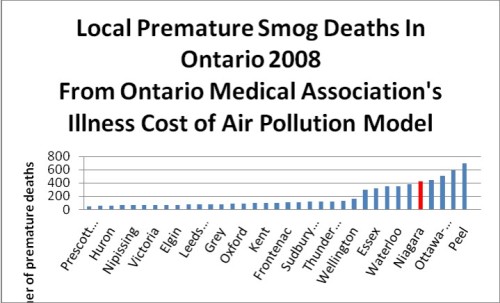 A typical chart, released over the years by professionals in the medical community, showing rates of smog related deaths in communities across Ontario, including Niagara.

Ironically, a disproportionate number of older people who may suffer the most health impacts from these moves to weaken air quality protection programs on both sides of the border voted for Doug Ford in Ontario and Donald Trump across the United States.

But we may also see at least some short term savings at the gas pumps, even if the health impacts and the long-term impacts on the environment for generations that are younger or not yet born may be significant.

There are almost always  trade offs.)

Toronto, Ontario – The Government of Ontario today announced the next step in its fight to defend the people of Ontario from the federal government’s plan to impose a punishing new carbon tax on Ontario families and businesses.

Minister of Environment, Conservation and Parks Rod Phillips and Attorney General Caroline Mulroney today announced that the Government of Ontario will take immediate steps to challenge the constitutionality of the federal government’s carbon tax at the Ontario Court of Appeal.

“During the election campaign we made a clear promise to the people of Ontario that we would use every tool at our disposal to fight the federal government’s plan to impose a carbon tax on Ontario families and businesses,” said Phillips. “We are keeping our promise.”

Ontario’s position in court will be that the federal Greenhouse Gas Pollution Pricing Act imposes an unconstitutional tax on Ontarians.

The decision to commence a reference to the Ontario Court of Appeal is in addition to the decision announced by Premier Doug Ford last month to intervene in the Government of Saskatchewan’s reference also challenging the federal carbon tax.

“The federal carbon tax will have its day in court. But it is already on trial among the families who will be forced to pay more for gas, home heating and everything else if the federal government gets its way,” said Mulroney. “Our message to Ontario families, businesses and workers worried about the carbon tax is this: The federal government may have abandoned you, but we never will.”

According to a recent media report in the Globe and Mail newspaper, federal government officials are working to cut a deal with large industrial emitters behind closed doors, recognizing that the carbon tax is a risk to competitiveness and jobs.

“The Trudeau government is finally confessing that their carbon tax will invite an economic catastrophe,” said Phillips. “Our message to the Prime Minister is that it is never too late to do the right thing. Cancel your carbon tax and put Canadian jobs and Canadian families first.”