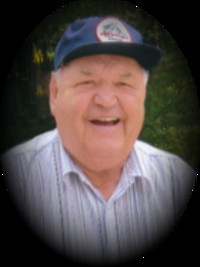 A Powerhouse in the Niagara Falls Tourist Industry, He and His Park Became Targets of Controversy as the Years Wore On 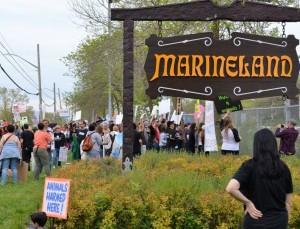 Love him or hate him (and there never seemed to be a shortage of people who felt one way or the other), John Holer, who died this past Saturday, June 23rd at age 83, was every bit a self-made man who built a venue for tourists that, by the 1980s, lived up to all the hype in those ubiquitous ‘Everyone Loves Marineland’ commercials as the most popular attraction next the Falls themselves.

In September of 1992, while I was working as an environment reporter at the then independently owned St. Catharines Standard, where I had already written a string of stories on animal advocacy groups critical of Marineland for its exhibition of whales, dolphins and other animals, John Holer still trusted me enough to tell me his story for a profile piece I was doing on him for the newspaper. 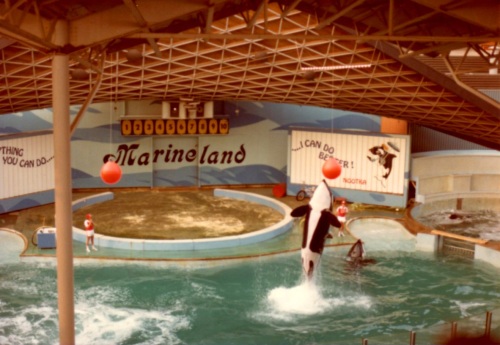 A look at one of the old shows, circa 1980s, with a killer whale (orca) jumping for a ball at a Marineland water theatre

Born in 1935 in his native Slovania (then part of Yugoslovia), he spent some of his younger years training animals for circuses in Europe before crossing the ocean in the late 1950s to begin a new life inCanada.

And if timing is everything, Holer’s timing for opening an amusement park in Niagara Falls where next to the Falls themselves, there wasn’t much else around at the time aside from a Tussaud’s Wax Museum and a Niagara Falls Museum that included an Egyptian mummy and the stuffed remains of a three-legged goat (as my childhood memory recalls) among its exhibits, was impeccable.

The 1960s were affluent times with young families, flush with disposable income, looking for things to do with their leisure time. There was also a growing public fascination over stories about “killer whales” (orcas) being taken into captivity for the first time from coastal waters off Seattle, Washington and Vancouver, B.C. 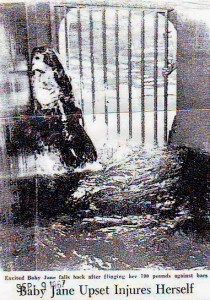 A grainy photo from the pages of a September 9th, 1967 edition of the St. Catharines Standard, shows a right whale named “Baby Jane” at Marineland, crashing her 700-pound body against the bars of a holding tank – “with blood gushing out,” according to the story under the photo. A Marineland trainer is quoted saying “he thinks the wahile has gotten her violence out of her system now and will be all right.”

“I didn’t want to build a park … where there is strictly rides, rides, rides,” Holer went on to tell me. One of the secrets of Marineland’s success from the beginning, and for so many years to come, he said, was letting people get as close as possible to whales and dolphins, and to deer, bears and all of the other animals he brought into the park.

And there to build that park and micro-manage its operations every step of the way was John Holer himself, looking more like one of Marineland’s hundreds of full- and part-time employees as he road around its grounds in a golf cart, wearing work pants, a plain, short-sleeved shirt and ball cap.

But the captive animal exhibits and allegations of mistreatment of animals – allegations that, to date, have never been validated in the courts, also made Marineland and Holer, himself, the targets of growing public protest as the years went on, continuing with hundreds of demonstrators from both sides of the border lining a road in front of the park this past May for the opening of its 57th season.

By the time I arrived to do some coverage on the May 19th demonstration, some of those on the picket lines told me that John Holer had been out, as he often was at other demonstrations in the past, driving back and forth in Marineland’s parking lot, staring the demonstrators (who he so often wrote off in interviews as “kooks”) down.

I often wondered why he did that because, on the surface, it made it look like the protesters had really got his goat, and it made good for some good fodder for any TV news crew that was around too. He couldn’t seem to resist though. That park was his pride and joy, and in conversations I had with him over the years, he could barely contain his anger over people, who he often referred to as “kooks”, were out there, running it down.

The demonstration this May 19th in front of Marineland in Niagara Falls, Ontario

One of those demonstrators, Catherine Ens of Niagara Action for Animals (NAFA), had this to say when asked about John Holer’s passing –

“While John Holer’s business tenacity has to be acknowledged, we have been campaigning for almost 30 years with the express purpose of encouraging an end to animal captivity at Marineland,” said Ens in a statement to Niagara At Large. “It was certainly always our hope the park would evolve and recognize entertainment value in other forms and that the general emerging trend towards an environmental ethic would acknowledge those animals as sentient beings and not merely a means to an end.”

“We are hopeful,” added Ens, “that with the closure of this era, change can come and that the animals can find homes in sanctuaries and rescues.”

In statements reported in mainstream media outlets, including The Toronto Star and The St. Catharines Standard, Niagara Falls Mayor Jim Diodati, like so many other mayors in the past, praised Holer and the park he built for the many decades of benefits Marineland brought to the local tourist industry. 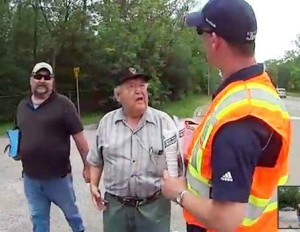 John Holer, centre, in an emotional confrontation a few years back with a demonstrator in front of the park. A security guard, left, looks on.

“He was a pillar, and he was a pioneer,” Diodati was quoted saying of John Holer. “He created a lot of opportunity for a lot of people and (his death) is a loss to the community.”

Diodati went on to say something else that anyone who may keep Marineland operating as an amusement park would do well to keep in mind.

I’d like to see it continue as an attraction, but without the animals performing,” said the mayor, adding that Marineland is now at the “crossroads.”

I would say that Marineland has been at the crossroads for quite some time, not just around circus-like animal performances but around keeping mammals like whales and dolpins, that belong in vast oceans, in cement pools.

The last time I visited John Holer at Marineland, it was the late 1990s and he took me out to see a brand new pool he had just finished overseeing the construction of – a pool much larger than any others at the park and one that would be named “Friendship Cove.”

He declared that this pond would more than meet any standards set in North America for marine mammal parks, then he repeated something he told me in so many other interviews. 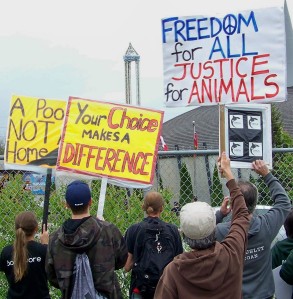 Animal activists in front of Marineland this past May 19th, urging people not to go in.

“I have a clear conscience. My animals are looked after A-1. …. I would be the biggest fool walking on this Earth if I did not take care of these anmals,” he said, stressing once again that a single whale or dolphin is worth hundreds of thousands of dollars to a marine acquarium . “I couldn’t afford to lose my animals.”

Maybe not, but the Niagara Falls mayor’s reference to the crossroads is spot on.

The walls have been closing in on animal performances like those so long featured at Marineland for quite some time now.

So much so that SeaWorld in the United States, which opened its first marine mammal parks about the same time Marineland opened in the early 1960s, announced two years ago that it would stop breeding orcas in captivity and would eventually phase out marine mammal performances.

Last year, Ringling Bros. and Barnum and Bailey Circus – a major venue for animal performances for 146 years – rolled up its tents for the last time.

So as much as the timing may have worked for John Holer when he opened Marineland 57 years ago, time has not been on the park’s side, so far as its animal exhibits are concerned, in more recent years.

One thing that Niagara Falls Mayor Jim Diodati was quoted saying in the newspaper articles about John Holer’s passing that I do not agree with is this; “To me, it would be sad if (Marineland) was turned into simply residential development when it could potentially be a major tourist attraction like Canada’s Wonderland.”

I wasn’t going to get in to this so soon after John Holer’s passing, but since it has already been broached in the mainstream media, what is wrong with residential development at the Marineland site?

Should John Holer’s family and/or anyone else with interests in the estate decide to sell the sprawling park property, maybe – just maybe – some consideration could be given to negotiating a deal with the China-based company now planning to urbanize parts of the nearby Thundering Waters Forest to do their urban development on the Marineland property instead.

Wouldn’t that be a nice way of restoring some balance in favour of nature for all of the animals that lived in captivity at Marineland over the past 57 years?

There would be nothing sad about that, Mr. Mayor.

Now here, for John Holer, is a vintage version of the ‘Everyone Loves Marineland’ commercial when the park was still riding high and those walls still seemed so far away, in the final decades of the last century –