“I’m inviting the other leaders to get on the same page as Ontario families who don’t support the privatization scheme in hydro. It’s not too late.” – NDP Leader Andrea Horwath

News from the Office of Ontario  NDP Leader Andrea Horwath 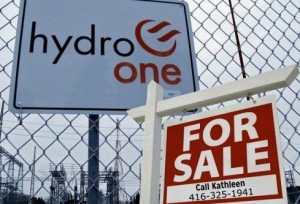 Queen’s Park, Ontario  — This November 29th, Ontario NDP Leader Andrea Horwath initiated debate on a motion that forces all three parties to vote on whether Ontario will keep Kathleen Wynne’s privatized hydro scheme in place – or start reversing course and bringing Hydro One back into public hands.

“The effects of privatization are now evident,” said Horwath. “Sky-high hydro bills. Applications to hike prices even more. A plan to raise rates for 21 remote and largely First Nations communities. Spending billions to merge with an American coal-burning company. And, now, a proposal to install pre-pay meters in Ontario. That’s what privatization looks like.

“Today, I’ll put a motion forward to start undoing that damage and start heading back towards a public hydro system, so Ontario has control and affordability once again.”

Horwath said she was dismayed to learn Saturday that Conservative Patrick Brown is now on board with Kathleen Wynne’s hydro plan. According to his party’s platform, he intends to keep Wynne’s disastrous and expensive private hydro plan in place, including her multi-billion-dollar borrowing scheme which will skyrocket hydro bills right after the election.

“I’m inviting the other leaders to get on the same page as Ontario families who don’t support the privatization scheme in hydro,” said Horwath, who will table the motion for debate and vote on Wednesday afternoon. “It’s not too late.”

“It’s time for a plan that offers hope to Ontario families let down by Kathleen Wynne. It’s time to stop the damage and take Ontario in a better direction. And it’s time to give people and businesses hope that lower hydro bills are on the way, and they’ll stay affordable.”