“The Niagara watershed is too precious an asset to be auctioned off to hungry developers. Let’s get to the bottom of this right now.” – Ontario Public Service Employees Union President Warren ‘Smokey’ Thomas

Niagara, Ontario – In an interview with Niagara At Large and a media release below, Warren ‘Smokey’ Thomas, President of Ontario Public Services Employees Union (OPSEU), said his union – one of the largest public sector unions in the country – will be pressing the Ontario to take action in the wake of the axing of eight more front-line jobs at the Niagara Peninsula Conservation Authority. 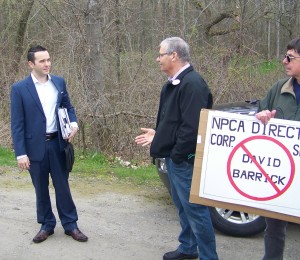 OPSEU President Warren ‘Smokey’ Thomas (right) confronts NPCA administrator (also a Port Colborne regional councilor), before one of the Conservation Authority’s board meetings this past spring. Photo by Doug Draper

“The provincial government owns this now. They can’t turn a blind eye and we are not going to let it off the hook. How can they say they care about the environment if they don’t do something about this,” said Thomas in an interview this September 29th, as news circulated that the NPCA – a publicly funded water body that was created more than six decades ago to safeguard the health of Niagara’s watersheds – has virtually wiped out front-line jobs in its watershed department.

“I don’t see how the provincial government can get around this. This is absolutely egregious,” added Thomas, whose union represents a number of what’s left of front-line employees at the NPCA and whose OPSEU health and safety representative Terri Aversa was recently refused an opportunity to speak to NPCA’s board of directors about a union-sponsored survey that alleges numerous cases of workplace at the Conservation Authority.

Thomas told NAL the union will now be amping up pressure on Premier Kathleen Wynne’s Liberal government, including its Natural Resources Minister Kathryn McGarry and others, to appoint a special supervisor to go into the NPCA and purge it of administrators and board members who are responsible for what the union sees as a targeted firing of employees that place environmental protection over the special interests of developers – a culling of employees, Thomas adds, that now sees an NPCA that has about as many employees serving the public on the front=line as it does managers.

Environmentalists on the NPCA are being let go, charged Thomas because they are dedicated to “an inconvenient truth” around conservation and environmental protection that developer friends of the Conservation Authority’s managers don’t want to hear or deal with.

In a story in The St. Catharines Standard on the latest job cuts at the NPCA, the newspaper noted that Conservation Authority’s  Mark Brickell did not what to comment on the specifics of the cuts, except to say that “what we have done is make some staff changes.”

“They are changes that are consistent with where we are going at the NPCA,” the newspaper quoted Brickell saying. “Certainly, we will continue to protect the watershed and fulfill all the requirements of our mandate.”

Yet many in Niagara, including everyday citizens, MPPs, and councillors sitting on city and town councils share the views expressed by OPSEU’s president in this post that the NPCA has comes off the rails when it comes to conservation of natural areas and watershed protection.

They have been demanding a full, independent, third’s party audit of the NPCA’s operations to get to the bottom of questions and concerns over how the Conservation does business with millions of our tax dollars, and growing numbers of them want a change in NPCA management.

Now here is the news release circulated by OPSEU this September 27th, followed by a link for  additional information 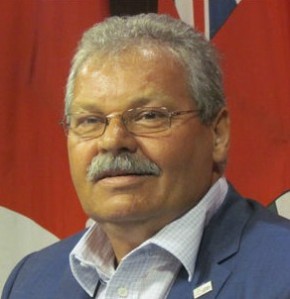 The job losses will cut the agency’s Watershed Management Department in half.

“This is an assault on workers, on the NPCA’s conservation mandate, and on the environment of the Niagara Region,” said Thomas. “How is the agency going to fulfil its mission of conserving, restoring, and managing the Niagara watershed when half of the department has just been eliminated?”

Of the eight layoffs, seven are in the watershed department. Watershed employees are tasked with reviewing development proposals and issuing permits around development.

“You have to wonder what’s behind these layoffs,” Thomas observed. “From what I understand, the NPCA is saying Niagara Region should be doing this watershed management work. But the NPCA has been doing a great job at this for the last decade. Why the sudden shift?

“As I see it, the agency and the region have two radically different mandates,” he continued. “The NPCA is at pains to protect the environment from harm caused by development, while the region wants to promote economic development. If the NPCA won’t protect the watershed, who will?”

Yesterday, two MPPs stood up in the Ontario legislature to express their concerns around the NPCA’s pro-development drift: Cindy Forster, the NDP member for Welland, and Jim Bradley, MPP for St. Catharines, government whip, and the longest-serving member.

“These MPPs know that something is rotten with NPCA management and its board,” said Thomas.

“I think the provincial government needs to put a freeze on these layoffs pending an investigation of the NPCA’s workplace practices and development policy. Its callous treatment of unionized staff, its job cuts and austerity budget, and its abrupt withdrawal from so much watershed restoration and protection work should be setting off alarms at the Ministry of Labour and the Ministry of Natural Resources and Forestry.

“The Niagara watershed is too precious an asset to be auctioned off to hungry developers. Let’s get to the bottom of this right now.”

For a recent Niagara At Large story, highlighting concerns raised by St. Catharines Riding MPP Jim Bradley and Welland Riding MPP Cindy Forster on what is going down with the NPCA, click on – https://niagaraatlarge.com/2017/09/27/urgent-news-two-niagara-mpps-make-case-in-ontario-legislature-for-total-overhaul-of-npca-managers/ .