April 10th, 2015 – Mayors are the political heads of Canadian municipalities, but chief administrative officers (CAOs) are the ones behind the scenes who have a major impact on the efficient operation of the city. 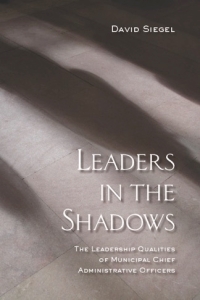 Often the highest-paid municipal public servants, CAOs or city managers, are tasked with providing advice to council and running the day-to-day operations. They’re hired, not elected, and they’re often overlooked and not well understood.

In his new book, Leaders in the Shadows, Brock University Political Science Professor David Siegel shines a light on the CAO, examining the leadership qualities of effective municipal managers.

Siegel uses two active and three retired CAOs from across Canada as examples of exceptional city managers and shows what leadership traits, skills and behaviours helped make them successful.

“These five people have been judged by their peers to be highly successful. They’re highly-qualified leaders as CAOs,” Siegel said.

Siegel, who has previously written or edited seven books, said he decided to focus on CAOs because of the significant role they serve in communities.

“The Chief Administrative Officer is one of the most important people in the municipality that determines the quality and kinds of services delivered to residents,” he said.
Leaders in the Shadows, published by the University of Toronto Press, examines the challenges and opportunities faced by public servants at the municipal level and opens the curtains on one of the most important jobs at city hall.

(Niagara At Large invites you to join in the conversation by sharing your views on the content of this post below. For reasons of transparency and promoting civil dialogue, NAL only posts comments from individuals who share their first and last name with their views.)