At an October 6th meeting of the Grimsby Town Council, councillor David Kadwell got some sense of the difficulties in challenging archaic studies.

Author of this post, conservationist John Bacher, joins others recently on a tour of the Irish Grove Forest in Grimsby. Photo courtesy of Richard Young.

Kadwell attempted to bring a notice of motion to discuss a Class Environmental Assessement on the proposed extension of Livingston Avenue through the 26 acre Irish Grove Forest. If the proposal is approved, one of the last rare Lake Ontario Plain Forests, recognized as Significant in the Niagara Regional Policy Plan, will be cut in two.

The Grimsby councillor’s attempt to rescue the Irish Grove Forest was not popular with his fellow councillors and his notice of motion went nowhere. In this situation, the conservationist councillor found himself in similar circumstances to then newly elected St. Catharines councillor, Mark Elliott, when he discovered the 1965 St. Catharines Transportation Study.

When first elected eight years ago, Elliott was stunned to see that a 1965 study, prepared by the Proctor and Redfern consulting firm, was be still guiding planning decisions in St. Catharines. This situation is especially bizarre since the study assumed the urbanization of fruit land all the way to Seventh Street, which was then in Louth Township. Most of these lands are now protected by from urbanization by the provincially established Greenbelt.

Elliott has been complaining for eight years that the 1965 study should be sent to the St. Catharines Museum. However, it still remains the only overall transportation study guiding the city,-based on a plan that would have wiped out a third of the remaining Niagara Fruit Belt.

What drew attention to the 1995 Delcan report was the launching of a Class Environmental Assessement to extend Livingston Avenue into lands protected by the Greenbelt. The Delcan report is the basis for justifying the need for the extension.

The Declan report shows the Irish Grove Forest as part of a bigger “Potential Urban Settlement Area Boundary Expansion”. This, including adjacent agriculturally zoned lands, form part of a “Potential Urban Settlement Boundary Expansion.” It maintains that Livingston Avenue’s extension is needed to “provide required access to new development in the area.” 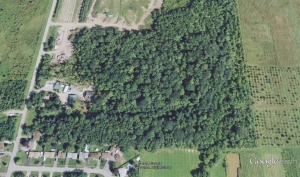 The leading opponent of the Livingston Avenue extension Bruce Mackenzie has illustrated how other rare forests in the highly deforested fruit belt area will be negatively impacted by a longer Livingston Avenue. A Carolinian forest at 438 Main Street will be slashed and successional woodlands cut through. These Lake Ontario Plain Forests are very rare and only one per cent of Grimsby north of the Niagara Escarpment has any forest cover.

Mackenzie has warned that the remaining Lake Ontario Plain Forests “contain tree and flora species and their genotypes that reflect the species of the original forest. These woodlots

are also significant to wildlife in the area as they present some of the few areas available to them and are quite important to the migrating birds that enter and exit Ontario each year as a stop over places for feeding and residence as they travel around the Great Lakes or stop along their shores. The soils in these woodlots also preserve the original soil structure and its characteristics and related life forms.

The Irish Grove Forest contains some magnificent old growth giants. These include Red and White Oaks estimated to be 400 years old. The forest has towering White Pines over a century old-unusual in Niagara, where most such super-story trees were logged off. It now contains a climax Carolinian Forest, dominated by mature Shagbark Hickories and Sugar Maples.

If a forested, unopened road allowance through the forest is used for an extension of Livingston Avenue, the Irish Grove Forest will be cut in two. The dangers of this are seen by the exotic buckthorn growing in along slashes made here when the region expropriated this allowance in the 1970s, and installed utility lines. Cutting through the forest would also, as Mackenzie has warned will make the remaining fragmented forests vulnerable to wind damage, invasion by exotics and the spread of disease.

Let us hope that signs calling for saving the Irish Grove Forest will spread. They need to be on lawns at election time throughout Niagara.

John Bacher is a veteran conservationist in Niagara, Ontario and  long-time member of the citizen group, Preservation of Agricultural Lands Society. A past contributor of posts to Niagara At Large, his most recent book is called ‘Two Billion Trees and Counting – The Legacy of Edmund Zavitz’,