If the voters of Welland didn’t want him representing them on regional council, why should the residents of Niagara have him possibly chosen by the newly elected regional council as our region’s chair? 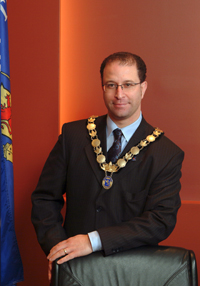 According to a story posted this December 1 on Niagara This Week’s website, the answer to that question from Welland’s outgoing mayor and defeated regional council candidate Damian Goulbourne is that he is going to put his hat in the ring for the regional chair’s job anyway.

Technically, there is nothing stopping Goulbourne from doing it.  Niagara Region’s bylaws continue to allow for the possibility of a chair being appointed from outside the pool of elected regional councillors, although that has not been the pattern for most of the regional government’s 40-year history.

The last three regional chairs,  Peter Partington,  Debbie Zimmerman and Brian Merritt, were all elected to the council by voters in their respective municipalities of St. Catharines,  Grimsby and Niagara Falls before putting their hats in the ring. But there is still the question.

Even though Goulbourne can, by law, place his name on the slate for regional chair,  should he?

Yes, we know.  He has a base of support out there. Earlier this November, the St. Catharines-Thorold Chamber of Commerce had a column in Niagara daily newspapers endorsing him as the best candidate for the job.

The chamber made this endorsement before getting a fix on who else has since declared their decision to run, including Bruce Timms of St. Catharines, who scored high in the polls to keep his post as a regional councillor in the October municipal elections, and Brian Baty,  a two-term councillor from Pelham who was acclaimed in Pelham because, presumably, no one in his municipality cared enough to run for the job or felt that they could beat him.

Two other elected regional councillors – Bart Maves, a former Conservative MPP from Niagara Falls, and Gary Burroughs, who has served as Niagara-on-the-Lake’s lord mayor, have also declared their interest in the regional chair position.

Therefore,  it seems a little odd that the St. Catharines-Thorold chamber would endorse a defeated Goulbourne before, in Baty’s case at least, even contacting him to learn more about his vision for the region.

After all, the chamber will probably want to work in a cordial way with whoever gets the job. Why make such an endorsement at all?  One of the few answers may be the hope that some have had for while now that Goulbourne would be the next regional chair and they just can’t seem to give up on the idea, even though he lost to two incumbent regional councillors, George Marshall and Cindy Forster.

Goulbourne has apparently done a pretty good job of convincing a core constituency of significant others in the north end of Niagara that he is the best person to fill the regional chair’s seat.

As a long-time close watcher of regional politics,  I can only speculate here but I suspect his support of the Niagara Health System’s so-called “hospital improvement plan” and the NHS’s decision to build the new, $1.5 billion hospital complex in west St. Catharines had something to do with the support he has received from some north-end parties.

By the same token, it may have had something to do with his lack of support in Welland where many there are concerned about what is happening to services in that city’s hospital.

In the Niagara This Week piece,  Goulbourne is quoted saying he wants to put his name in the ring for regional chair because “I believe in Niagara.”  Well so do a lot of the rest of us who live here.

I believe in Niagara enough that I am trying to make a go of it with this online news and commentary site despite the fact that there are little or no opportunities for journalists to make a living in this region.

Certainly Goulbourne can find other ways of showing his belief in Niagara than pushing forward with his ambition (openly expressed by him when he announced his decision to run for a regional council seat rather than run for a third term as Welland’s mayor) to seek the regional chair’s job when he has been defeated by the voters of his own city.

One is kind of tempted to pull Goulbourne aside and say; ‘Hey Damian, can’t you take a hint?”

(Click on Niagara At Large at http://www.niagaraatlarge.com for more news and commentary of interest and concern to residents in our greater Niagara region.)

Leave a Reply to Joseph A. Somers Cancel reply