And Few, If Any, In Ontario’s Business Community Seem to Give a Damn or Seem Willing to Pay More Taxes to Cover the Cost

Get out the heavy machinery and plough through more of our crop lands and woodlands to build ever more highways. Is that what we still want in the third decade of a 21st Century faced with a highly destructive climate crisis? Apparently a good number of  his business supporters and others in Ontario do.

Since the 2022 Ontario election officially got started in these first days of May, Premier Doug Ford and his Conservatives have made a highly-orchestrated point of standing on green fields where they want highways built and empathize how much they view spending multiple billions of our dollars on every more roads, highways and bridges as a centre piece of their vision in this third decade of the 21st century of economic growth for Ontario.

In the pre-election budget Tory Premier Doug Ford, Niagara West Tory MPP Sam Oosterhoff and company tabled late this past April, Ford’s level of spending allows for the province’s deficit to balloon to a high of $19.9 billion and calls for spending some $250 billion on building and expanding roads, highways and bridges across the province (that is a quarter of a trillion dollars we may not have) over the next 10 years.

Spending multi-billions of dollars on more highways in this 21st centuary and in an cllimate era is apparently just fine with Niagara,s major business group

If these kind of deficit and spending totals\s were produced by the New Democratic (NDP) or Liberal Parties, we would hear the end of the screaming by business leaders across Ontario, including our own Greater Niagara Chamber of Commerce (GNCC).

Instead we have Mishka Balsom, Chief Administrative Officer (CAO) for the GNCC saying in a recent statement that although her many business representatives in Niagara have some concern over the ballooning deficit, “We are encouraged to see the Government of Ontario’s pledge to build 1.5 million homes over the next ten years and their extensive commitment to building highways and public transit.”

A Premier who promotes a 1950s, baby boomer era vision of Ontario’s future.

Building 1.5 million new homes may be fine if those homes go inside urban areas (rather than rural green lands) already zoned for residential growth and who is going to argue against more spending on public transit.

But does Balsom and her group, and business groups like theirs across Ontario, actually believe that spending multi-billions of our tax dollars on building more roads, highways and bridges to accommodate ever more cars and trucks in an age of climate crisis a good plan for our future.

Just to give one example, Ford, Oosterhoff and company want to construct a twin bridge for the Garden City Skyway in St. Catharines at a cost of God knows how many millions, and, unless we hear otherwise, Niagara’s business chamber members and Ford’s supporters are all in favour of that. 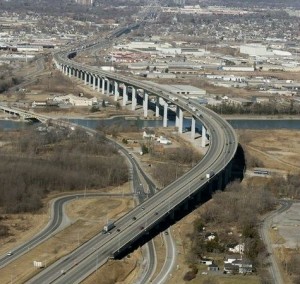 And why wouldn’t Ontario taxpayers want to spend more multi-billions of our tax dollars in the 21st century, that could be spent on public transit or health care, twinning the Garden City Skyway in St. Catharines? That’s what Doug Ford and his business supporters want to do.

The answer is probably never? Yet the Ford Conservatives and their business supporters in Niagara seem to have no problem with spending what may amount to many billions of dollars twinning the Garden City Skyway.

They don’t seem to give a damn that they support building more roads, highways and bridges to accommodate ever more cars and truck – even as we face a highly destructive climate emergency.

That is what we are facing in this Ontario election – a Ford government and business community that supports its policies of wreaking havoc on what is left of our environment for our children and generations to come. 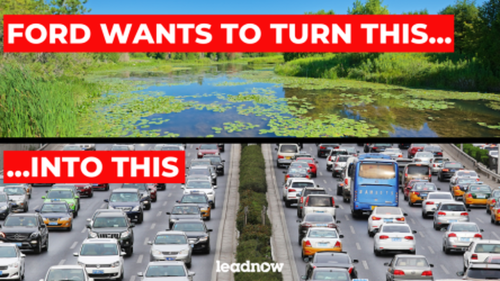 Let the paving of what is left of our natural heritage go on and on and on.

In greed, there is no conscience or shame. And there is certainly no hint of a willingness to pay more in taxes to cover the cost.

Ford and his supporters in the business community would just leave the cost – no matter how heavy it is – to future generations.