A Message to Humans – ‘Don’t Choose Extinction. Save Your Species Before It’s Too Late’

“Going Extinct is a Bad Thing.”

This Message is from a Dinosaur, through an Ad produced and circulated world-wide by the United Nations

A Brief Foreword from Doug Draper at NAL – 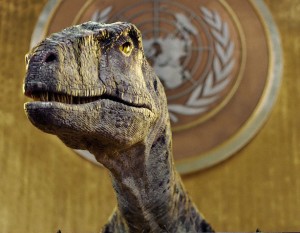 This dinosaur has a critical message for all of us.

It is as apparent to me as it may be to you that after more than a year and a half of this pandemic, there is a good deal of fatigue out there.

You can see and hear it in the faces and voices of people you encounter in a grocery store or the few other places you go. And I feel the fatigue too, especially when it comes to all of the COVID-19 related news and all of the politics around it. It sometimes is all that one can do to keep from turning all of this news off and leaving it off.

One thing we dare not tune out though is the global climate emergency that is unfolding all around us –right now.

As countless numbers of scientists around the world are now warning us, we are on the verge of crossing the point of no return and for our sake and the sake of generations to come, we must build up all the will we have left to take action.

On the verge of a global conference on climate this November in Glasgow, Scotland, the United Nations produced the following ad which is already going viral around the world and which I will leave you with at the end of another week where we have been battered with so much COVID-19 and, in Ontario, pre-election related B.S. from politicians.

I urge you to watch the U.N ad by clicking on the screen immediately below –

A QUICK UPDATE FROM NIAGARA AT LARGE – To watch an unedited version we found of of the dinosaur delivering his message,  click on the screen below –

To read about the United Nation’s ‘Code Red’ report on the climate crisis, released this past August, click on – https://niagaraatlarge.com/2021/08/09/united-nations-sends-a-code-red-warning-to-the-world-on-climate-crisis/

2 responses to “A Message to Humans – ‘Don’t Choose Extinction. Save Your Species Before It’s Too Late’”