Why can’t our public leaders in Niagara, Ontario do what our neighbours in Western New York have already done? – Approve a global desiignation on the Niagara River as an internationally important wetland. Photo by Doug Draper

Given the drastic changes we see every day with climate change, I believe any initiative that promotes the protection of our wetlands including the Niagara River Corridor is imperative. The Ramsar Convention is a voluntary Treaty, committed to promoting the conservation and wise use of water-based ecosystems through international engagement and collaboration.

Niagara Falls and Fort Erie endorsed the Ramsar Designation in 2015 along with the Niagara Peninsula Conservation Authority and Ontario Power Generation. It’s still under review by Niagara Regional Council but endorsed by its Planning and Economic Development Committee.

I was shocked to see the Niagara Parks Commission decided not to endorse this extremely important initiative that has been in the works for years by groups on both sides of the Niagara River.

It must be stressed, that a Ramsar designation does not impose any restrictions on the management of any sites involved. It is non-regulatory and non-binding. The U.S. Department of State and the U.S. Fish and Wildlife Service as well as State and Local Governments celebrated the designation of the Niagara River Corridor as a Wetland of International Importance over a year ago.

Some of the many Western New York representatives – our American neighbours from municipalities, state and federal government and citizen groups in and around Buffalo and Niagara Falls, New York – celebrating the designation of their side of the Niagara River as a Ramsar globally important wetland a year ago this October. And yet our leaders on the Ontario side of the Niagara River still can’t do this!

Given where the Niagara River was in the 1970’s and 80’s to where it is today is astounding and incredible work on both sides made it happen. A news article from May 7, 1987 had the staggering headline that Mist from Niagara Falls was toxic. “TORONTO (AP) _ A University of Toronto study says the romantic mist rising from Niagara Falls contains large amounts of cancer-causing chemicals, posing an unknown risk to 150,000 people living in the border area.”

Western New York area …. Jajean-Rose Burney, with Canadian counterpart and Niagara, Ontario resident Jocelyn Baker, celebrating an international designation for the American side of the Niagara River, a year ago this October 1st. After years of trying, we still can’t get this done on the Ontario side.

Decades of restoration efforts by provincial, state and federal governments as well as environmental groups helped to significantly improve the quality and ecological health of the Niagara River we see today.

That must continue for future generations. The MNRF has the lead role for the care and management of Ontario’s Crown land and water covering about 87 per cent of the province.

Many of the province’s significant wetlands are located on provincial Crown lands. I am asking if the Ontario Government and Provincial Ministries involved will join me in endorsing the Ramsar Designation of the Niagara River and support our American friends in creating the first bi-national-transboundary Ramsar site in North America.

This Open Letter was also sent to  –

A  Footnote from Doug Draper at Niagara At Large – 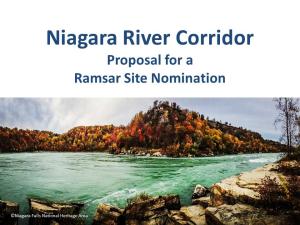 Why do we still not have elected leaders and public bodies on the Niagara, Ontario side of the Niagara River willing to do this?

Niagara At Large has posted news and commentary on the disgrace of the Niagara Parks Commission – a body created over a century ago to protect and preserve the Niagara River corridor – and more recently, Niagara Regional Council’s decision to put off supporting this great global designation for the Niagara River in the days to come.

Thanks to far too many backward thinking elected members of our local and regional councils in Niagara, Ontario, and thanks to partisan hacks now controlling the board at the Niagara Parks Commission – we in Niagara, Ontario are still not able to bestow on this iconic river a Ramsar designation that our American neighbours did a year ago. It is beyond embarrassing for this Niagara region on the global state.

What in hell is wrong with us that we can’t simply do this? Niagara At Large will have more to post on this in the days and weeks ahead.

To read a recent piece Niagara At Large posted on this issue, click on – https://niagaraatlarge.com/2020/10/03/our-niagara-region-still-has-an-opportunity-to-celebrate-the-niagara-river-and-those-who-have-fought-so-hard-to-protect-it/ .