Whether or Not He ‘Deserved’ to Lose his Seat as NPCA’s Chair, David Bylsma Had To Go

When West Lincoln Mayor Dave Bylsma made what turned out to be hisill-fated  pitch to fellow members of the Niagara Peninsula Conservation Authority’s board of directors this January 15th to serve for a second one-year term as the board’s Chair, he finished by motioning an arm in the direction of the entrance to the NPCA’s Ball’s Falls Conservation Centre.

Some of the protesters who greeted NPCA board members, including David Bylsma, outside the Conservation Authority’s Annual General Meeting this January 15th.

It was there, at the Conservation Centre’s entrance way, where a number of citizens staged a protest earlier on, urging him to step down. 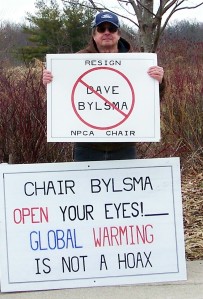 “I have held every member of this board and every staff member in the highest respect,” said Bylsma as he was about to make his arm gesture.

“I do not deserve that,” he said, his voice slightly quivering.  “I have been a good Chair.”

Talk that he should not be Chair, Byslma may or may not know, was always there, looming in the background, going back a full year ago, when a majority of fellow board embers first appointed him to that position.

It lingered with people who, rightly or wrongly, also wanted to give him a chance … give him the benefit of the doubt, , in spite of whatever off the rail views he may hold on the issue of climate change.

But the calls caught fire during the first week of this New Year when  For Our Kids  Niagara – a recently organized group made up mostly of young parents concerned about their children’s future – circulated an open letter highlighting one of Bylsma’s other roles as president of the Christian Heritage Party, a fringe political organization that characterizes climate change as a “phony crisis” and accuses  United Nations science bodies and individuals  like former U.S. vice-president Al Gore, who won a Nobel Prize for his part in raising public awareness about climate change, of engaging in dangerous propaganda.

In a story published in local newspapers this past January 8th, Bylsma reportedly explained that, for his part, he believes that the climate is warming, but he does not believe that has much, if anything to do with human activities, including the excessive amounts of carbon pollution we are emitting to the atmosphere through the burning of gasoline, coal and other fossil fuels.

David Bylsma lost his seat as Chair of the NPCA’s board this January 15th, in wake of controversy over his views on climate change.

Bylsma went on to suggest that certain industries, specifically those  involved in renewable energy like wind farms, are promoting the idea of a climate crisis in order to make money.

In their open letter, members of For Our Kids Niagara argued that it “is inappropriate to select someone who does not believe in the science of climate change to be a member of the board of the NPCA (and) even more worrying to us that this man became Chair.”

“This is an outrageous position for anyone involved in environmental conservation,” the group’s letter said.

The group, members of whom held a large banner at the front entrance to the Ball’s Falls Conservation Centre this Saturday reading; “We Need Urgency In A Climate Emergency,” concluded the letter by stressing that time is running out to do what needs to be done to address the climate crisis.

“Our kids,” the letter stressed, “need a future.”

This January 15th,  at the same time Bylsma was making his case for another year as NPCA’s board Chair, the United Nations issued another piece of bombshell  news release that received world-wide coverage.

The U.N. reported  that 2019 was the second warmest year on record, next to 2016 – all this while catastrophic fires, fuelled by a devil’s brew of climate-related factors, continue to wipe out whole communities and a critical mass of the wildlife in Australia.

“Unfortunately, we expect to see much extreme weather throughout 2020 and the coming decades, fuelled by record levels of heat-trapping greenhouse gases in the atmosphere,” said Petteri Taalas, Secretary-General of the U.N.-sponsored World Meteorological Organization (WMO) in response to this news.

So did David Bylsma deserve what greeted him at the January 15th Annual General Meeting of the NPCA, with the protesters waiting for him and his fellow board members outside the door?

Did he deserve to lose – whether his elimination had much, if anything to do with hiis views on climate change or not –  in the first round of voting that ultimately saw another board member  – Hamilton City Councillor Brenda Johnson-  move to the Chair’s seat?

There is no doubting much of what Bylsma stated in his pitch, that over the past year, while he was Chair, the NPCA has done quite a lot to undo  the the damage that was done  over much of the past decade, when the likes of Carmen D’Angelo, Bart Maves, Bruce Timms, Sandy Annunziata and David Barrick were running the show.

Bylsma, along with Pelham Regional Councillor Diana Huson, who remains on the board and who served for the past year as its Vice-Chair,  and others who came on the board in 2019, accomplished a good deal with the NPCA’s surviving staff and with interim CAO Gayle Wood (who left that post  this past December) to close the curtain on the Conservation Authority’s nightmare years, and to get it back on track as a true conservation body again.

But at the end of the day, it makes no sense at all – in fact, it would be irresponsible – to continue with a Chair on the NPCA’s board who embraces views on climate science that resemble those that screwballs in Donald Trump’s orbit adhere to.

State-of-the-art  science around the world proves the young parents in the group For Our Kids Niagara right.

We have no more time for that kind of deny-and-delay mentality playing a leadership role at any level of government – federal, provincial, state or municipal – when most of the experts on climate science around the world are now warning that we face a full-blown climate emergency.

And we certainly can’t don’t need it on a body like the NPCA, which is one of the very few public bodies in our region that can and should serve as a strong voice for protecting and preserving  what is left of our natural heritage.

So it is out with David Bylsma and in with Brenda Johnson as the NPCA’s new Chair, and it is in with long-time Grimsby conservationist Bruce MacKenzie, who replaces Diana Huson, who graciously passed on the seat to MacKenzie  as the board’s Vice-Chair. 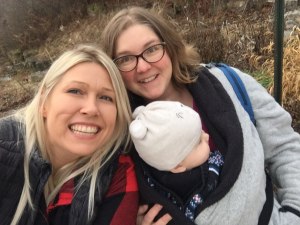 From the Niagara-based group for our kids, Diane Archer (right), friend Shannon, and Diane’s biggest reason for getting involved in the climate action movement,, her baby son Everett

It is in the best interest of us all and to the great watershed we share in Niagara and neighbouring Hamilton aand Haldimand County to wish Johnson and MacKenzie, and the NPCA’s new CAO Chandra Sharma, well in their new roles.

Together, with the rest of the board and the staff at the NPCA, they will continue the work of restoring public respect for this body and making it the strong voice it should be for protecting and preserving what is left of the natural heritage in our Niagara watershed.

As for the end of David  Bylsma’s tenure as Chair, Diane Archer of  For Our Kids Niagara, said; “We want to thank the members of the board for listening to our concerns and voting accordingly. …. Next we want to thank the concerned citizens of Niagara who have connected with us this week and who truly care about making a difference to our future. …. We are in a state of emergency and it’s time to treat it like one.”

Melissa McGlashan, a Niagara citizen who has been a long-time observer of what has been going on at the NPCA and who attended the January 15th meeting, said; “The Chair and Vice Chair elections show that public feedback was taken seriously by the board which is encouraging. The substantial changes that took place throughout 2019 mean that as 2020 starts, the NPCA  has a new CAO, a new Chair and a new Vice-Chair (that will) hopefully  result in good things for conservation in Niagara and Hamilton.”

I leave the last word to Don Alexander, a person I consider to be an elder statesman in this Niagara region,  who was a member of  one of the first regional councils in Niagara, and who has been a long-time board member on the Niagara Escarpment Commission, an urban planner and a citizen activist par excellence.

Don Alexander, who  is also a person I have always found to be fair-minded, attended the January 15th Annual General Meeting of the NPCA.

He watched the voting that led to the ouster of Byslma as Chair of the NPCA and  he had this to say; “This makes me feel real good. You have to give a lot of credit to those parents and to those children out there. The dynamics of this were excellent.”

And when it comes to any question of who deserves what, I think we should all agree that our children deserve a decent future.

To learn more about the NPCA board’s new Chair, Vice-Chair and other board members, click on – https://npca.ca/administration/board-members

To hear a CKTB Radio interview with members of For Our Kids Niagara on this issue, clcick on – https://www.iheartradio.ca/610cktb/audio/dave-bylsma-out-as-npca-chair-hamilton-s-brenda-johnson-new-chair-of-npca-1.10465791