A Special Report from the Canadian Centre for Policy Alternatives 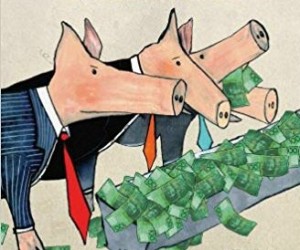 Ottawa, Ontario — Canada’s 100 highest paid CEOs made 227 times more than the average worker made in 2018, surpassing all previous records, according to a new report from the Canadian Centre for Policy Alternatives (CCPA). That’s up from 197 times average worker pay in 2017.

“Put another way, by 10:09 a.m. on January 2, the average top CEOs will have made as much money as the average Canadian worker will make all year. That’s the earliest time on record in the 13 years we’ve been tracking these numbers,” said report author and CCPA Senior Economist David Macdonald.

“Growth in the vast gap between excessive CEO compensation and average incomes is an indicator of Canada’s income inequality juggernaut,” adds Macdonald. “Wealth continues to concentrate at the very top while average incomes barely keep up with inflation.”

Among the report’s findings:

“The federal government needs to reckon with the runaway C-suite compensation that is contributing to Canada’s growing income inequality gap. Left to their own devices, it is clear what these companies prioritize—big bucks for top positions regardless of performance, leaving crumbs for the vast majority of their workforce,” Macdonald adds.

The government could address excessive CEO pay through a review of tax loopholes, as proposed in the December fiscal update, with a focus on the preferential treatment of stock options and capital gains. Higher tax brackets for the extremely rich and the elimination of corporate deductions for pay over a million dollars would also help.

Fail Safe: CEO compensation in Canada will be available for download on the CCPA website at  https://www.policyalternatives.ca/

The Canadian Centre for Policy Alternatives (CCPA) is one of Canada’s leading sources of progressive policy ideas. Our work is rooted in the values of social justice and environmental sustainability. As non corporate-funded policy think tanks continue to be silenced, the importance of the Centre has never been greater.

A Footnote from Niagara At Large reporter and publisher Doug Draper –

If governments and private and public corporate executives in Canada want to see a citizens uprising in this country or something on par with the kind of toxic populist takeovers we are witnessing in other western democracies, just keep hiking corporate bosses’ pay, widening the wage gap, cutting taxes for the upper few per cent and screwing people in the middle and at the lower end of the income spectrum, and watch what happens.

It won’t be a very pretty picture for anyone but the populist demagogues and the narcissists, nihilists and totalitarians who take advantage.

For more on this issue, click on the arrow in the middle of the screen below –