Groups say the Ontario Government is putting the aggregate industry ahead of people. The province needs to go back to the drawing table, and consult with communities and environmental groups, rather than give industry free rein

Toronto, Ontario – With the introduction of Bill 132, the Ontario Government is rolling a boulder in front of municipal efforts to control groundwater impacts from aggregate pits and quarries and taking aggregates policy in the wrong direction.

Proposed changes to the Aggregate Resources Act (ARA) will prevent municipalities from addressing the impacts of pits and quarries on groundwater by outlawing the use of municipal zoning bylaws to
prevent aggregate operations from digging beneath the water table. This change poses a dangerous threat to local groundwater supplies and quality.

The provincial government is also proposing to stop municipalities from
implementing zoning restrictions on aggregate development on Crown Land within their boundaries. This change impacts many communities across Ontario.

Meanwhile, the government’s proposed amendments would make it easier for aggregate operators to make changes to their operations with a poorly defined “permit by rule” system that allows changes for unspecified “low risk” activities. It would also prevent consideration of road damage from haulage in deciding on license approvals.

The government needs to remove schedule 16 from Bill 132 and consult with communities that live near aggregate producing areas and environmental groups before proceeding with any changes to the Aggregates Resources Act . Aggregate producers cannot be allowed destroy Ontario’s natural heritage, disrupt communities, or endanger municipalities’ ability to protect the fresh water their citizens depend on. 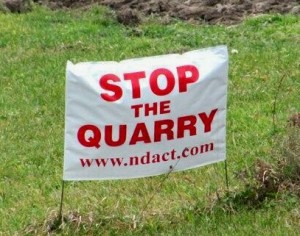 The changes to the Aggregate Resources Act are only one of the many environmentally-damaging elements of Bill 132. Upcoming media releases from environmental groups will outline other harmful
impacts of this bill.

“Stripping away the ability of municipalities to protect local groundwater
supplies so we can build more roads and subdivisions with virgin materials is a recipe for conflict and environmental damage. The government has proposed these changes after consulting almost exclusively with the aggregates industry. It’s unacceptable. Ontario is not for sale,” says Keith Brooks, Programs Director of Environmental Defence [ https://environmentaldefence.ca/ ] .

“The government needs to press pause on this, and go back to the drawing
table.”

“When you combine these changes with the changes proposed for the Provincial Statement (PPS), you have a recipe for disaster. The PPS changes would permit aggregates extraction in all significant natural features outside the Greenbelt that are currently protected under the PPS, including provincially significant wetlands outside of southern Ontario, provincially significant woodlands, valley lands, wildlife habitat, significant Areas of Natural and Scientific Interest, fish habitat and the habitat of threatened and endangered species,” says Caroline Schultz, Executive Director of Ontario Nature [ https://ontarionature.org/ ] .

“The proposed changes to the Act that will allow more pits to open with fewer constraints are coming on far too quickly, without the necessary public input or ability for oversight from municipalities. Wellington Water Watchers is calling for a pause on any new changes to the ARA and for a moratorium on any new permits to take water for quarrying operations until cumulative impacts can be assessed and until there is a requirement for a full Environmental Assessment on each proposed new quarry,” says Arlene Slocombe, Executive Director of Wellington Water Watchers [ https://wellingtonwaterwatchers.nationbuilder.com/ ] .

“This is a proposal in search of a problem. There is no shortage of aggregates in Ontario, and too few options available to communities that take issue with these operations. And now the government wants to make it even harder for citizens and municipal government to protect their communities. The government needs to stop digging a deeper hole in our environmental protection rules and
rethink its approach to aggregates,” says Graham Flint, President of Gravel Watch Ontario [http://gravelwatch.org/] .

For More News And Commentary From Niagara At Large – An independent, alternative voice for our Greater Bi-National Niagara Region – Become A Regular Visitor And Subscriber To NAL At Www.Niagaraatlarge.Com .

One response to “Ontario Government Bows To The Aggregate Industry, Moves To Block Municipal Efforts To Protect Groundwater”