A News Commentary by Doug Draper and a New Report from the non-for-profit, non-partisan public advocacy group, Environmental Defence Canada 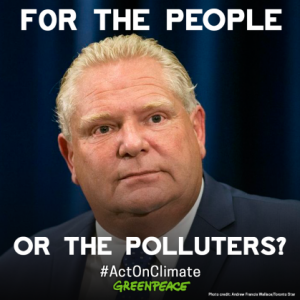 Ontario Premier Doug Ford has accomplished little or nothing on the climate emergency file, according to a new report released by the public advocacy group, Environmental Defence

A short answer to Bill Maher’s question is that for current generations of Republicans in his country and current generations of Conservatives in Canada, any kind of environmental protection policies and programs are enemies of the gods they worship more than their children’s future – money, power and growth at any cost, otherwise known as unbridled, predatory capitalism.

In summary, looking after the natural world around us is simply not in a modern-day Republican’s or Conservative’s DNA.

And if the allergy federal Conservative leader Andrew Scheer so clearly has to strikes for climate action, and if the feckless environmental platform his party has cobbled together for the current federal election isn’t enough to prove it, we have Scheer’s friends and allies here in in the Province of Ontario. 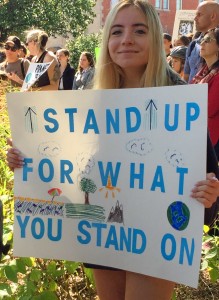 One of more than 500 young people and older residents who joined a strike for climate action in St. Catharines/Niagara this late September. They joined many thousands across Ontario, and millions around the world participating in similar rallies. Photo courtesy of Rose Marie Cipryk.

Of course, I’m talking about Ontario Premier Doug Ford and his Conservatives, and their deep pocket supporters in the business community supporters who have been waging a war on the province’s environmental protection safeguards since they came to power a year ago last June.

A new report, released this October 10th by Environmental Defence, one of Canada’s and the world’s most respected advocates for a greener future, shows that the Ford government in Ontario has done little or nothing to reduce the greenhouses gases contributing to what many international experts are now calling a “climate emergency” and an “existential threat” to the ecosystems that sustain life on our planet.

“Tens of thousands of Ontarians took to the streets recently to call on governments to address the climate crisis,” say Environmental Defence representatives in a news release accompanying the report.

“But Ontario’s leaders have effectively ignored this crisis in the hopes that someone else will fix it. Without accelerated action, Ontario’s promise to reduce carbon pollution without a price on carbon is meaningless.” 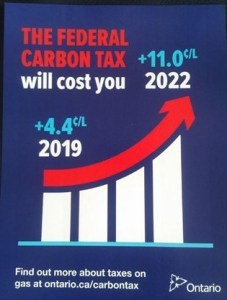 This Ford government sticker is a shot at one of the federal Liberal government’s efforts to place a price on climate-changing carbon pollution by, in part, demonizing it as a “tax.” Many critics see the sticker as propoganda Ford is putting out there just in time to assist his federal Tory firiend Andrew Scheer in the upcoming October federal election. Why hasn’t Elections Canada raised concern about  this?

Far from accelerated action, in one short year Ford has already one a long way toward dragging Ontario decades backwards through numerous moves, including: 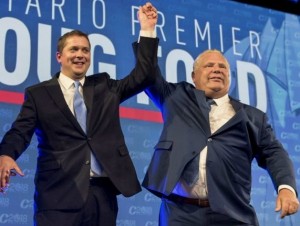 For the sake of our environment and the actions we need to address the climate emergency, let’s make sure that federal Tory leader Andrew Scheer (shown left with Ford) and his party are soundly defeated in this October’s federal elections

And the list goes on and on, and it would  be longer still if, last June, the Ford government – now seriously tank in popularity polls – had not shut down the provincial legislature until after this October 21st federal election in an apparent attempt to be a little less in our face while its federal buddy Andrew Scheer and his candidates try scaring up enough support in vote-rich Ontario.

Ford’s malodorous presence has not gone away though. It is there in his recent attempts to play around with the legislation governing Ontario’s Conservation Authorities, including the Niagara Peninsula Conservation Authority (NPCA), and what they may or may not be able to do in the future to fulfill their efforts to protect and preserve our watersheds.

It is also there in those misleading stickers Ford and company forced gas stations to put on their pumps – just in time for the kickoff this September of the federal election – as a way of trying to convince Ontario motorists that the price the federal Trudeau government is putting on carbon pollution is stealing money out of their pockets. 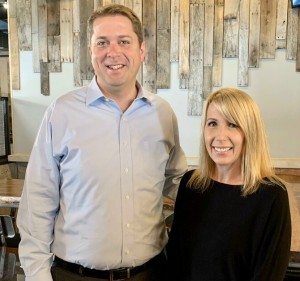 Federal Conservative leader Andrew Scheer posing with his candidate in the Niaara Centre riding, former Wainfleet mayor and former NPCA board member, who ran and lost in June 2018 as a candidate for Conservative Doug Ford in the last provincial election.

In Niagara Centre, the federal riding this commentator lives and votes in, it is also there in the candidate running for Scheer’s Conservatives.

That candidate is April Jeffs, a former Wainfleet (Niagara, Ontario) mayor who ran a failed race as a Doug Ford candidate in the 2018 Ontario provincial election, and was later appointed by the Ford government to serve on the board of the Niagara Parks Commission.

Jeffs also served on the last board of the Niagara Peninsula Conservation Authority – a board that largely drew scorn from residents across the region who accused it of purging the NPCA of a number of respected conservation employees and turning its back on too much of the Authority’s historic conservation mandate. 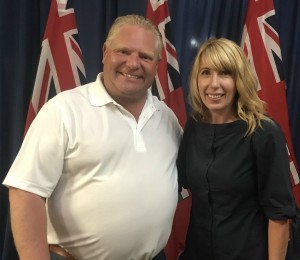 Here is April Jeffs in 2018, then a candidate in the Niagara Centre riding for Doug Ford’s provincial Conservatives. The Ford government later approved her appointment to the board of the Niagara Parks Commission

So it is very hard to not to view Ford and Scheer through the very same lens – a lens that is anything but green – and one can only imagine what little will be left of the environmental policies and programs generations of Canadians fought to put in place if, following  this federal election, we have Ford continuing on with his war against the environment in Ontario, and Scheer reinforcing his flanks and supplying him with even more ammo at the federal level.

This October 21st – on voting day – do your part not to let that happen. There is nothing less than our future as a species and a planet at stake here.

Stay tuned to Niagara At Large for more on what is at stake in this federal  later.

In Failure to Launch: A Progress Report on Ontario’s Climate Change Actions[https://environmentaldefence.ca/wp-content/uploads/2019/10/ENVIRONMENTAL-DEFENCE-Report-Failure-To-Launch-A-Progress-Report-on-Ontarios-Climate-Actions.pdf] , we review the province’s progress on this promise, and conclude that Ontario has taken no meaningful steps to reduce carbon pollution in the past year. 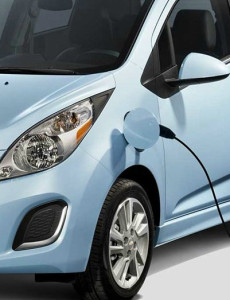 The Environmental Defence report is also critical of Ontario’s Ford government for getting rid of rebates aimed at encouraging more people to buy electric cars. Similar rebates are still working in other provinces and states across North America as another way of shifting away from carbon-polluting fuels

“So far, Ontario has weakened the province’s targets to reduce carbon emissions, cut just about every program to fight climate change, and then failed to replace these programs with any meaningful actions.”

Our analysis shows that the Ontario government has made little progress towards implementing these actions and meeting the targets to reduce greenhouse gas emissions set out in their own plan, even after swapping in a weaker emissions reduction target for the year 2030 – 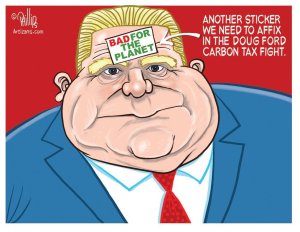 “The province needs to act quickly and decisively to get back on track when the government returns to the Legislature this fall,” added Sarah Buchanan.

“The world is demanding climate action. Tens of thousands of Ontarians took to the streets recently to call on governments to address the climate crisis. But Ontario’s leaders have effectively ignored this crisis in the hopes that someone else will fix it. Without accelerated action, Ontario’s promise to reduce carbon pollution without a price on carbon is meaningless.”

The full report can be accessed here. Click on – [https://environmentaldefence.ca/wp-content/uploads/2019/10/ENVIRONMENTAL-DEFENCE-Report-Failure-To-Launch-A-Progress-Report-on-Ontarios-Climate-Actions.pdf] .