Some of you may already have seen the heartbreaking video of an 11-year-old girl down in Mississippi, shaking with tears for her parents and begging for their release after they and hundreds of other allegedly undocumented workers were arrested in Gestapo-like raids under the jackboot of Trump’s cruelty and hate.

“Government, please put your heart — let my parents be free with everybody else, please,” pleads the girl that a shocked world is coming to know as Christina Peralta and a face for all of that rage and hate. “I need my dad … mommy,” the girl pleads. “My dad didn’t do nothing. He’s not a criminal.”

Christina was reportedly one of many children who headed off to their first day of a school year that begins early in that state, only to discover that their parents had been arrested during raids at food-processing plants where they were employed – all of this happening in the wake of the hate-filled mass murder of more than 20 people at a shopping mall in El Paso, Texas.

If you haven’t already, I urge you to watch the brief video clip of this little girl by clicking on the screen below. Certainly every American should watch it –

.I watch this and I wonder what the hell has gone so terribly wrong in a country where I have many good friends – a country I once had a good deal of respect for?

Between this and so many countless other disgraceful and horrifying things said and done by this reality TV monster now occupying the Oval Office, why aren’t millions of people in cities and towns across the country marching in the streets every weekend, demanding his impeachment?

Is what this guy is doing just accepted as normal now?

As for whatever is left of that once proud Republican Party of Abe Lincoln and Teddy Roosevelt, and all of the Bible waving and rhetoric about right to life and family values, what a crock that turned out to be

Anyone who is still a supporter of Trump or a member of that party ought to be ashamed of themselves, but there doesn’t seem to be much shame left there.

Look at the way that they chuckle and cheer after someone yells out; “Shootthem!” (meaning the brown-skinned migrants) at one of Trump’s recent rallies. Then take another look at the video of that little girl.

I know that my American friends may not want to hear this, but some of my fellow Canadians have told me they don’t even feel like crossing the border any more.

That, sadly, is one of the many consequences of all of this.

For the sake of that little girl and for every decent-minded American (and I know there are many out there), when will this culture of hate ever end? 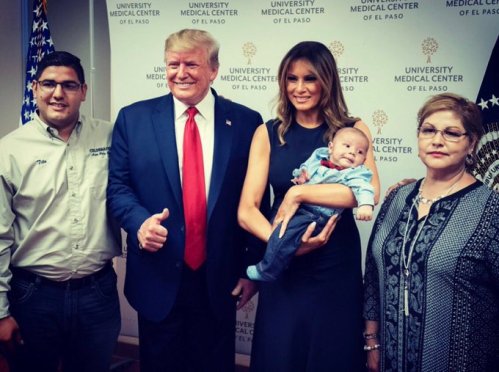 How about this? Trump flashes a thumb’s up as he and his First Lady do a grip and grin photo shoot with a now orphaned baby during El Paso visit. Both the baby’s parents were gunned down in a Walmart by a young white guy who parroted Trump’s hate language against brown people.