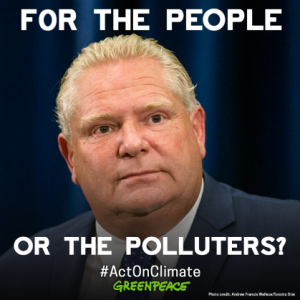 A Statement from the Ontario New Democraric Party 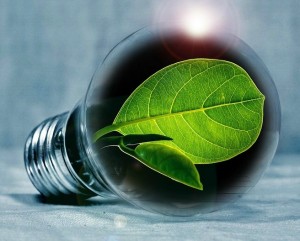 Much of the light is out for green energy projects in Ontario while other jurisdictions around the world lead the way to a greener, cleaner economies

“By cancelling 227 clean energy projects Doug Ford has cancelled jobs, and signed off on even more emissions to feed the climate crisis.

Thanks to a National Observer report, we now know Doug Ford secretly scrapped a project that would have made a community centre in Etobicoke net-zero, cancelled a zero-emissions child care centre construction project, and stopped the conversion of  TTC busses to electric – along with hundreds of other projects. These investments lower emissions, fight climate change and create jobs. Wynne and the Liberals let us down – they should have been transparent about all the projects being funded through cap and trade.

Doug Ford’s crusade against the environment has got to be stopped. We’re already experiencing more floods, wildfires and tornadoes in Ontario, and if we don’t take action to fight the climate crisis, our children and grandchildren will pay an unthinkable price.”

A Footnote  from Niagara At Large reporter and publisher Doug Draper –

If you wonder why Niagara At Large is coming down so hard – with no apologies – on Ford, Scheer and the like, this is why 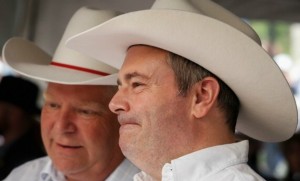 This second week of July , Ontario Premier Doug Ford and his pal, Alberta t Premier Jason Kenney, gathered at the Calgary Stampede with some of their other extreme right allies, wearing 19th century cowboy costumes and vowing to keep Ontario, Alberta and the rest of Canada (if they can help get fellow climate laggard Andrew Scheer elected prime minister this October) stuck in the 20th century when it comes to continuing to produce, transport via pipes and burn up dirty energy that is ravaging what is left of a health planet for future generations.

As a veteran environment writer and environmentalist with a daughter in her 20s, I believe that we have to take the gloves off and slam back at these dangerous, morally bankrupt clowns, the dirty energy interests they represent, and all others who support them with their donations and their votes. 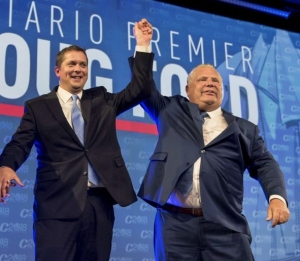 Federal Tory leader Andrew Scheer (left) sharing the stage with Ontario Premier Doug Ford. If and when these two win, the future of our planet is the loser

Collectively, they are complicit in placing the future of our children, grandchildren and all life on this planet in jeopardy.

The rest of us, whether we are journalists, politicians and public servants, members of the private sector or whatever our station in life, have got to stop Ford, Kenney, Scheer and their like before they do any more to damage and destroy efforts to protect and preserve the life-sustaining resources of the only place in this universe where we have a home.

For anyone out there wondering why this journalist, on this news and commentary site is coming out so aggressively against what Ford and his ilk are doing  in the areas of environmental protection, endangered species protection, conservation, energy, transportation and transit, and urban planning, that is the reason.

The future of my daughter and her generation, and generations not yet born is the reason.

Please join in the fight to stop the war on our environment by the likes of Ford, Kenny and Scheer, and Trump across the border.

There is no “planet B” and there is no other option but to stop playing nice with these dangerous dinosaurs and fight as hard as we have to until they and their tar pits and pipes, and the  greedy interests they represent are consigned to the ash piles of history.

In this October’s federal election in Canada, vote for the future of our planet.

Let’s hope and pray that our American neighbours do the same in November, 2020.

For more news and commentary from Niagara At Large – an independent, alternative voice for our greater bi-national niagara region – become a regular visitor and subscriber to nalNAL at http://www.niagaraatlarge.com .