‘Doug Ford’s cuts to Legal Aid Ontario will have a devastating an impact on low-income people who need legal help.’ 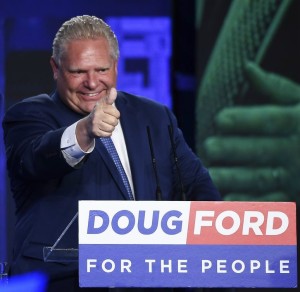 “I am devastated to think about the low-income residents in Parkdale who will be unable to access justice as a result of these callous cuts,” said Karpoche.

“We should not be telling single parents seeking child support or workers seeking wages they’re owed that they’re on their own to navigate the courts, but that’s exactly what will happen if these cuts to community legal clinics are allowed to stand.” 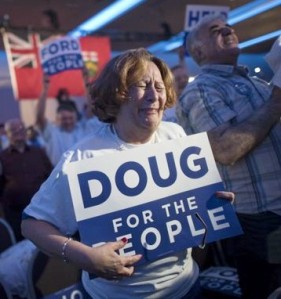 One of Doug Ford’s supporters, overcome with tears of joy on the night of June 7th, 2018, after the results came in, showing that Ford had won a majority government. Maybe she can tell us exactly who Ford is talking about when he declares that his government is “for the people.”

“Not only is forcing people to navigate the legal system without lawyers cruel, but it will result delays and backlogs in the court system, which will come with massive human and financial costs,” said Singh. “We should be doing more to ensure the most vulnerable among us can get legal help when they need it, not ripping supports away.

“We are calling on the Ford Conservatives to reverse these callous cuts to legal aid.”