This New Year’s, Let’s Pledge to Make Protecting this “Fragile Treasure” of an Earth our Mission

“We are all linked in a joined human enterprise; we are bound to a planet we all must share.” Bill Anders, a former NASA astronaut who took the first iconic photographs of our Earth from a space craft orbiting the moon, 50 years ago this December, 2018 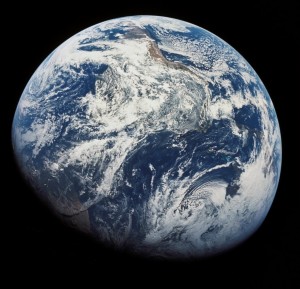 Before we say goodbye to this month of December and this year of 2018, it might do us well to remember something remarkable and never before experienced in human history that happened 50 years ago this just past Christmas Eve.

On December 24th, 1968, while countless hundreds of millions of people watched the grainy images beaming in over their television screens, three American astronauts circled the moon for the very first time during an Apollo 8 space mission.

One of the astronauts, Bill Anders, took out a camera as our Earth was rising above the moon’s hemisphere, and took the first ever photos of our planet taken from so far away, with the surface of another celestial body in the foreground.

Those iconic photographs of our blue and green planet, floating in the darkness of space, sent a stirring message home then, as they should still now, that this ‘third stone from the sun’ remains our only oasis for life in the universe.

So powerful were those images, that a year and a half later, in the spring of 1970, they played a role in inspiring tens of millions of people around the world to gather in their cities and towns for the very first Earth Day.

“The Earth we saw rising over the battered grey lunar surface was small and delicate, a magnificent spot of color in the vast blackness of space,” wrote Bill Anders of looking out from his space craft and taking those photos 50 years ago. “Once-distant places appeared inseparably close. Borders that once rendered division vanished. All of humanity appeared joined together on this glorious-but-fragile sphere. …

A child at an Earth Day march in April,2017. File photo by Doug Draper

“I thought of my wife and five children on that little planet,” Anders continued. “The same forces that determined their fates worked on the other three-and-a-half-billion inhabitants. From our tiny capsule, it seemed as if the whole Earth was smaller even than the space the three of us inhabited.

“Fifty years later,” he concluded, ‘”Earthrise” — the lingering imprints of our mission — stands sentinel. It still reminds us that distance and borders and division are merely a matter of perspective. We are all linked in a joined human enterprise; we are bound to a planet we all must share.

“We are all, together, stewards of this fragile treasure.”

Fifty years later – in a 21st century where one of the greatest threats to life we face is the havoc that we humans, through our collective greed and lack of care for what we pass on to future generations, are wreaking on the  atmosphere, the oceans, the polar caps and all of the other resources that drive our Earth’s climate – that last line from the person who took those epic pictures needs to be repeated again and again.

“We are all, together, stewards of this fragile treasure.”

As we say goodbye to 2018, let’s make a New Year’s pledge to make the campaign against climate change a major priority that we must wage against the lame-brain politicians and their supporters who would rather gut green energy programs and save a few dollars on the price of gasoline than share in an effort to protect and preserve this only oasis for life that we have in the universe.

If you care more about the planet than you do about saving a few pennies on a litre or a gallon of gas, or on supporting politicians who are stupid enough to believe that there is still a big future in oil and coal, and that climate change is a hoax, we must make that pledge.

As a sign someone was carrying in an Earth Day march this past year read; “There is no Planet B!”

To watch a brief documentary on the Apollo 8 mission to the moon, click on the screen below –

To read a firsthand account from retired NASA astronaut Bill Anders who took these historic earth photos, click on – https://www.space.com/42848-earthrise-photo-apollo-8-legacy-bill-anders.html .

One response to “This New Year’s, Let’s Pledge to Make Protecting this “Fragile Treasure” of an Earth our Mission”