Where are champions for non-violence and peace like Martin Luther King or Mahatma Ghandi when we so desperately need them?

Why they have been gun them down, of course. 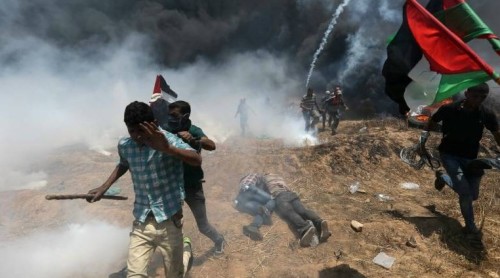 A “glorious day” this past Monday, May 14th in the Gaza Strip

And speaking of gunning people down, what a mad spectacle the world was treated to this past Monday, May 14th, 2018 with cable news channels broadcasting split screen images of Ivanka “celebrating “ the opening of a new U.S. embassy in Jerusalem, while a war zone where large numbers of Palestinian protesters where being wounded and killed by Israeli soldiers a short distance away.

“What a glorious day,” remarked Israel’s Prime Minister Benjamin Netanyahu as he stood near Trump during the opening ceremony.

How glorious a day, indeed, in this Orwellian madhouse of doublespeak and alternative facts where peace is war or vice versa. And as the representatives and peoples of many other nations, including Canada, raised their voices against the shooting of the Palestinians on the outskirts of Jerusalem, in the killing fields that are the Gaza Strip, Donald Trump’s shameless hack of a U.S. ambassador to the United Nations – the ever-so-hawkish Nikki Haley who some U.S. pundits and Republicans believe (God help us) might one day be a good president – defended it without a word of reservation.

I am usually one who looks at a challenge or conflict and stand with those who won’t give up hope on finding a resolution. After watching Ivanka and the Israeli prime minister behaving as if they were at a birthday party while bullets were tearing through flesh a few miles away, one word came to mind around any thought of a peaceful resolution to the longstanding conflict between Israelis and Palestinians – hopeless. 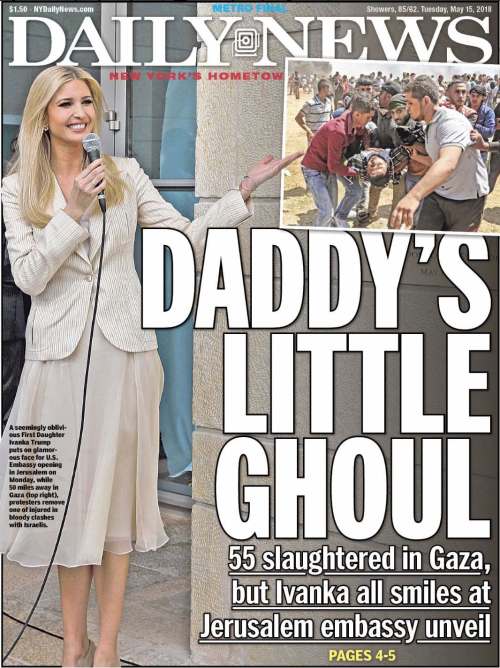 How one New York City newspaper depicted the madness

A Statement by the Prime Minister on violence in Gaza Strip, May 16, 2018
Ottawa, Ontario

The Prime Minister, Justin Trudeau, today (this May 16th) issued the following statement on the violence in the Gaza Strip:

“Canada deplores and is gravely concerned by the violence in the Gaza Strip that has led to a tragic loss of life and injured countless people. We are appalled that Dr. Tarek Loubani, a Canadian citizen, is among the wounded – along with so many unarmed people, including civilians, members of the media, first responders, and children. 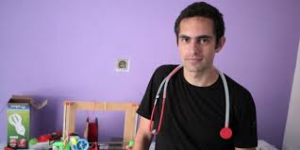 Dr. Tarek Loubani, a Canadian citizen, wounded himself, while tending to the wounds of others.

“We are doing everything we can to assist Dr. Loubani and his family, and to determine how a Canadian citizen came to be injured. We are engaging with Israeli officials to get to the bottom of these events.

“Reported use of excessive force and live ammunition is inexcusable. It is imperative we establish the facts of what is happening in Gaza. Canada calls for an immediate independent investigation to thoroughly examine the facts on the ground – including any incitement, violence, and the excessive use of force.

“Canada stands ready to assist in such an endeavour. We will work closely with our international partners and through international institutions to address this serious situation.”